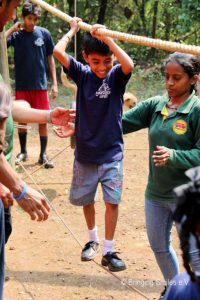 In the morning of November 18 we took 29 of the street kids we have been working with during the last months 2-3hrs from Mumbai to an adventurous day in the mountain area in Karjat. Luckily accompanied by some great friends and volunteers of Anstrengung United.

[blockquote]I was already here at 4:30 am, I was soooo excited and couldn’t sleep anymore!

Just seeing their shining eyes when entering the bus made it clear to us that for most of these children this alone was a very special moment. Filled with excitement when figuring out that the seats can even be reclined, they were holding their breakfast boxes tight and curiously looked outside the windows during the whole journey.

The actual adventure started when we arrived in a natural resort and split the kids into 3 teams for a treasure hunt. This was followed by the first team challenge – a low rappelling trail. While a part of the kids had to balance, jump and climb across wooden beams or ropes, the role of others was to support them. It was pure teamwork packed into a playful adventure. When asking the kids WHAT they think was mostly important to make them complete this challenge successfully, the answer came straight & fast:

[blockquote]…being together as a team made us strong, we could trust and help each other!”

– a girl from one group

Mission accomplished 🙂 After a nice get together during lunch looking into the forest, everyone had time for a break in the arranged dorms. Surprised about the simple fact of resting in a proper bed, the kids were first happily giggling but shortly afterwards falling asleep…

After an hour of rest, we had prepared some warm-up games. The next stop led to a tougher activity – roping down quite a high wall. After initial excitement, a few kids were getting nervous when they actually stood up there looking down, but when asking them if they want to skip, they said no. This was way more than just roping down, this was about proving themselves to be strong, overcoming their fears and gaining trust in their own capabilities. And they indeed impressed us. It was crazy how much power these little brave boys and girls triggered off. After reaching the ground and excelling themselves the children were so filled with proud.

With a fun soccer match we allowed everyone to enjoy the end of a really special day. With our Polaroid cam we captured the last moment of the day for each kid, before they closed the adventure with a dinner snack.

It was touching to see how some of the kids fell asleep only after 15 min sitting in the bus, while others were finishing the treasured dainties. When Nanu and his colleagues started to sing Hindi songs, all (awake) children were joining.

We dropped our little heroes back to their lives in the streets of Mumbai with a laughing and a crying eye at the same time… As we knew we would never forget the day with these great little people, we wanted to make sure they wouldn’t as well. Just a week later, shortly before our Bringing Smiles members had to leave Mumbai, we handed all of them a photo book as a memory to keep. When they opened it, you saw they were living through this exciting day again… With a big smile on their face.

We want to thank Nanu (Shrungar Raul) and his team from Anstrengung United for helping us organize this playful day. Also, we appreciate the great discount on brilliantly packed breakfast boxes by the Palladium Hotel. Another big thank you to Jan Rickel, who helped Gina and Manu making this a colorful day!