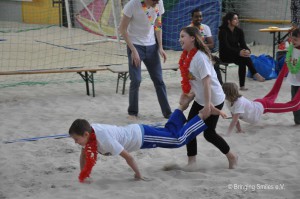 We recently organized our very first Bringing Smiles Beach Games event ushering in the summer season. A total of 30 kids attended the event from all over the NRW. Alma Sports club kindly donated two beach volleyball courts for the beach games event. Our volunteers worked tirelessly to ensure we were all set for a fun day.

We kicked off with the more classic games such as the egg-and-spoon race, sack race, and water balloon tossing which had kids screaming with excitement and eager for more. We had some more challenging games, for example, where teams of two where required to eat an entire bread roll that was suspended by a thin thread without using their hands. You can imagine the fits of laughter than ensued as the kids pressed the bread roll against each others cheeks in an attempt to take a bite. The crowd was also very animated in cheering them on. The highlight was the treasure hunt where the kids were required to find a small prize in a bowl of flour using only their mouths. They all burst out in laughter when they saw each others faces caked in flour. Some of our members couldn’t help themselves and also joined in for the fun ;). The games brought back some fun memories from their childhood.

We felt it would only be fitting to end the beach games with a splash. We sent the kids home with a day pass for the most fun and adventurous Aqua Park in NRW (Aqualand) where they could take all their friends from the orphanage or their entire family. They also received a Bringing Smiles beach towel and water ball (sponsored by Bettmer) all packed in a nice sea satchel.

We would like to thank ALMA Oberkassel & BETTMER for supporting this event. A special shout out to the Bringing Smiles members that contributed to this event and to Sameea and Matt for lending a helping hand. Thanks to Oli Hilbring for designing a fantastic logo for the event.