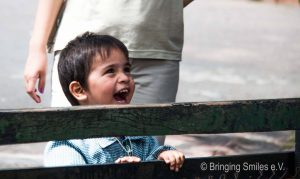 While in Buenos Aires, Natalia (who assisted with the cooking project) put Gina and Manuel in touch with a kinder garden in La Boca, which is one of the poor neighborhoods. The kids at this kinder garden had no opportunities to do any excursions the whole year. Our BringingSmiles Team immediately felt that this was a great opportunity to spoil the kids with an adventure excursion, a trip to the Buenos Aires Zoo 🙂

They organized two buses to pick up 47 children and the care takers. The kids set off for a scouting expedition in small groups. They saw a vast array of animals both big and small. It was amazing to see their happy faces as they explored the zoo. The elephants, monkey’s and reptiles where met with a mixture of fascination and curiosity. It was lovely to hear the tones of amazement, the “oooh’s” and “aaah’s” as they encountered many animals for the first time.

After a light snack for lunch, the kids were in for a little surprise as we handed them an animal toy and gave the kinder-garden a small collection of animal and nature books and a set of educational games with an animal theme.

The last hour of the excursion was reserved for some fun at the on the zoo playground. It was great to see kids being kids, running around and having fun. It was a truly special day for everyone involved.