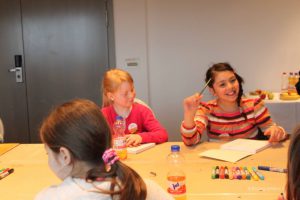 In March, we held our first cartoon workshop with 20 children from NRW. It turned out to be a super exciting day for everyone involved.The idea for this project came from Oli Hilbring, a passionate cartoonist and Art Director at HAVAS Worldwide.

What you are doing with Bringing Smiles is truly inspiring. Let’s invite some kids to experience the joy of drawing!

We were very pleased to see someone outside our core membership take the initiative, motivate a fellow cartoonist (Michael) to join and lead the workshop. This made it possible for us to invite 20 kids from children’s homes, special needs schools and facilities. The Radisson Blu hotel in Düsseldorf came to the party and sponsored 3 conference rooms with stunning views, adding a special touch to the whole event. The venue was a major topic of discussion as most of the kids had never ventured into a hotel before. It brought smiles to our faces as they marvelled at even the smallest of things.

Wow! Look at this cool bathroom. There’s even a hair dryer. If only I had my hair wet!

– One of the kids

We started the day off with a breakfast snack. The children then made their way into the conference rooms which were converted into makeshift art studio’s for the day :). Oli and Michael took over for the next few hours and did an amazing job in engaging the children and getting their creative juices flowing. At the lunch break, the kids were all smiles and proceeded to further entertain themselves by running through the hotel corridors. The children were also all given a canvas to paint and take home. It was a pleasure to see how captivated the children were by the playful approach adopted by Oli and Michael. It allowed the kids to experiment and explore their own abilities, building their confidence and enabling them to come out of their shell. We surprised the kids with a small gift of drawing materials to take back home and practice what they had learnt.

A big thank you to Oli Hilbring, Michael Holtschulte and the Radisson Blue Hotel for making the Cartoon Workshop possible. Thanks to our volunteers Petra Mede und Anna Rovira Esquerrà, as well as Jonas and Leon for the pictures they took and the fun they spread for creating a truly memorable day for children.