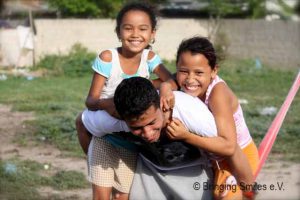 The idea for Project Colombia was hatched this summer when Gina, Manuel and Michael (Manuel’s friend) realised that they were vacationing in the Americas at the same time. Having recently heard about Bringing Smiles, Michael was keen to help organise the next project in his home country, Colombia! Some hours later, a plan was hatched to create some special moments for children in poor remote regions of Colombia. We made use of Michaels local knowledge to identify locations with children in need.

To get things started, Michael organised a big shopping session. The big surprise came when the shop assistant started packing the toys and sport equipment. We couldn’t figure out why the number of toys was almost double what we ordered and thought they were accidently miscounting. They weren’t! Michael had matched everything we had bought!

With Michaels dad help behind the wheel of the second car, we set off on an adventure to reach out to kids in north Colombia. We spent the first day on Isla Tierra Bomba, a very small island near Cartagena, only accessible by boat. The inhabitants were very poor and had tough living conditions with limited electricity and water supply. On the second day we made our way to the village of Palmar de Valera, and stopped at communities along the way. Despite the tough conditions, the people we met were very warm and welcoming. The highlights were the spontaneous soccer matches that took place in random places in the fields and even between small wooden houses. An unforgettable experience was seeing the children dance with joy and run up to us just for a warm hug.

A big thank you to Michael, his girlfriend Laura and dad Rodrigo for their amazing support in making this trip a resounding success.