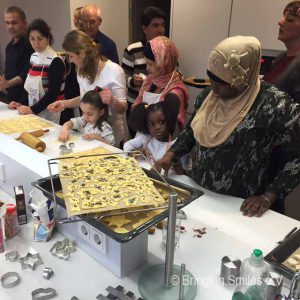 Christmas time – gifts for the beloved and cookie baking at home is on everybody´s mind. Thinking about the difficult situation many refugees are currently experiencing, we wanted to share some of this Christmas spirit with refugee families and decided to organize a Christmas Cookie Baking afternoon with them.

We got in contact with Evangelische Familienbildung in Düsseldorf (efa) as we had partnered with them before for our Bringing Smiles events. They were extremely positive to the cookie baking idea and agreed to work together with us to bring the idea to life.

The “event” took place on the 12th December and was a great success. 27 people who are currently seeking asylum took part in this joyful afternoon. Our volunteers brought along cookie dough in many varieties and distributed it across several baking stations. There was an immediate connection between the refugees and the volunteers. What helped immensely was the fact that one of our volunteers spoke Arabic as most of the refugee families were from Syria. Other refugees originated from Nigeria, Bangladesh and Albania.

Accompanied with Christmas music each refugee family prepared with a volunteer the cookies until these were ready to be put into the oven. It was amazing to see over 40 people in the big kitchen rolling dough, stamping out the cookies and placing them on the baking tray. There was so much going on and all people were highly engaged. After the cookies had been baked we decorated them with chocolate, icing sugar and other colourful toppings.

All refugee families took some cookies home with them together with a baking book and some other small gifts we gave to each family. Everybody enjoyed the event and people asked us when the next event will take place. What a spirit 🙂

We would like to thank Mrs Reyscher and Mrs Baumgarten of efa for supporting us during this day. We will definitely keep cooperating with EFA to organize similar events in the future. Also we would like to extend our thankfulness to the volunteers (Petra Mede; Petra Hoffmann; Rabea Hoffmann; Jennifer Zieling; Behiye Sollbach; Sharif Morsy; Lisa Tragut; Yue Li; Gabriel Alvarenga; Aline Alvarenga; Siggi Schmiedeberg; Sandra Eidthat) who helped out during the event – without their support it would not have been possible to run it. Many thanks!