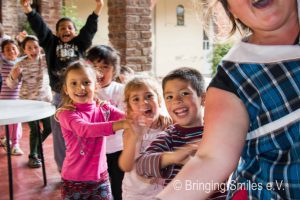 During a 4 weeks trip to Buenos Aires, Argentina, Manuel & Gina visited a Day care center for children called “Casa del Niños.” It was located in Ranchos, a very remote village approximately 150km south of Buenos Aires. The Day care center looks after 125 children by providing food, educational support, organizes leisure activities and caters for the overall wellbeing of the children. Many of the children come from disadvantaged communities and with often very disturbing backgrounds. Manuel and Gina immediately felt that this was the right place to bring some smiles.

They contacted the Day center to better understand how they could contribute to the great work already being done to educate the children and also make their surrounding more cozy and comfortable. They spent several days sourcing all the items on the wish list including sports equipment and gym mats, educational books, tales & adventure novels, painting utensils, white boards as well as educational board games and toys.

After some fun shopping, Manuel and Gina visited the day care Center on 13th of November. They were warmly welcomed by all the children from the toddlers to teenagers, with lots of hugs and kisses. The kids had many questions such as, “do all Europeans have such (blue) eyes?” or “how does it feel to fly, did the plane shake?” There was much laughter, especially to Manuel’s comment that he “would continue learning Spanish as he was still young” 🙂

With a polonaise they made their way to a room where all the gifts were placed. They little children faces were brimming with excitement, eager to start playing. The sun came out as if it joins the party. The next two hours were filled with much fun, screams and laughter, children being children as they kicked balls around and did the hula-hoop dance 🙂

They were having so much fun that the local media and government officials decided to pay a visit. They were eager to hear more about Bringing Smiles and what had made them pick out this particular Day care center. It was great to bring some attention from the community to the Casa del Niños. This however, was completely unintended as we prefer the keep the projects personal.

We were really impressed with Hérnan (Psychologist) and the team around him; they are doing a brilliant job with the kids, teaching them the right values as well as social skills and creating an environment that allows them to also just be kids.

A big thank you to Patricia who helped translate and to the Café Florida Garden, BUKITO Toy Store and Book Store JEKYLL for amazing discounts.