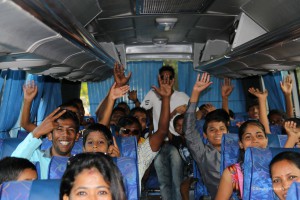 Since our last project, two of our members, Gina and Manu have moved to Mumbai. While we were sad to see them leave, we are excited about the prospects of having a few Bringing Smiles projects in India.

In fact, end of August they pulled off a spontaneous soccer event at the “Jan Vikas Society” orphanage for boys in Navi Mumbai, a home for 36 street children. What was planned to get be an initial get together with Gina, Father Francis (caretaker) and the children turned out be a memorable, fun filled afternoon for everyone involved.

Gina was discussing her plans to meet Father Francis and the children at the breakfast table. Manu as always was keen to join, but interestingly some of his teammates (at Mumbai City FC) and staff over heard the conversation and were thrilled with the idea of spending some time with the kids on their free Sunday. Literally within no time, a group of 8 including 4 footballers set off for the orphanage with a ball in hand.

The children were filled with excitement and disbelief that some of their icons had come to play football with them. They raced off to their dorms to get changed and then we walked around the corner to reach the meadow where they use to play. Most of the ground was muddy due to heavy monsoons, but this did nothing to dull the mood. We split everyone into two teams and kicked off an entertaining football match with many goals at both ends. The kids were completely up for the match and even the occasional slipping in the mud could stop their excitement. It actually didn’t matter which end they scored goals in. On occasion when Manu pointed out with a smile that the kid had scored in the wrong goal, the kid respond back “It doesn’t matter. I scored. Woooohoooo!!!”.

It’s amazing how much joy and happiness you can create by simply giving the children a little attention and a sense of being valued. It really is that easy to bring smiles.

Thanks to Alex Ambrose and Namrta Kumar for putting us in touch with Father Francis, the Mumbai City FC professionals and staff: Asif Kottayil, Rohit Mirza, Syed Rahim Nabi, Nidhi, Umer and Pranit for creating a special day for the children and Father Francis for making this event happen.