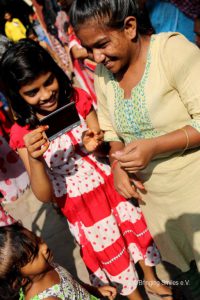 On the 6th of November 3 musketeers (Gina, Manu, Nidhi) set off on a mission to bring smiles to families living on the streets of Mumbai. They loaded the car with 40 grocery bags filled with a great mix of nutritious foods (hand-picked by our dietician Nidhi) and a few luxury items that these families would never be able to afford.

They made their way to the outskirts of Mumbai and were particularly touched by the families living in makeshift tents along the highways. Wherever they stopped the kids ran to greet them, over the moon for excitement. It was priceless to see their faces light up when they peaked into the grocery bags.

A particularly memorable moment occurred when they found themselves in the backyard of a small under-privileged community near the airport. They were completely swamped by children as they walked through the streets. Some soccer fans recognised Manu (as a Mumbai City FC player) and a spontaneous match ensued in the middle of the road.

Gina (our resident photographer) brought along a polaroid camera to take pictures of the kids and their families as a way of preserving the memory in a form that they could keep. For many it was their first photograph. The experience itself was magical as they watched this blank piece of paper suddenly illuminate with their faces. They kids simply couldn’t get enough of these “magic photos”. It was incredible to watch and take in the joy and happiness a simple photograph can bring.

At the end of the vist the kids waved them off them with their photographs in hand. It was an amazing time for everyone involved. They loved this community and were already planning to visit again. More on this soon 🙂

Special thanks to Nidhi, who has helped with her knowledge and time throughout this project. Also to Pranit and Papu, who helped with the massive grocery shopping.