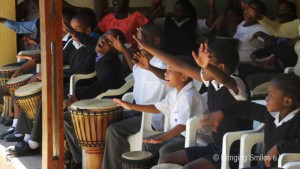 We recently rocked James House, a child and youth care centre in Hout Bay, Cape Town. We had 35 enthusiastic children from the Haut Bay community drumming, singing and dancing along to African hits such as “Wave your Flag” and “Waka Waka.”

This project was our first venture to use arts and music as a therapeutic means. We felt it was a perfect match as many of the children came from vulnerable communities and with difficult family circumstances. Andy Byskup (a.k.a drum master from DRUMKiDz) led the kids through an action packed and high energy drumming programme consisting of stories, songs and exciting drumming games. The kids just loved it.

This activity is so much more than a music programme, it works on many levels. It has the ability to really open up children emotionally, to channel any negative feelingss and recharge and reconnect with themselves and others around them… It works on so many development levels – in an age of so much technology and other distractions, it helps heighten their listening skills, ability to focus intently, as well as develop their self confidence

After a fun filled hour of high energy drumming, the children tucked into a their “snack packs” and took turns to take pictures with their new found hero, Andy Byskup. We left the kids with some drum kits and instructional CDs prepared by Andy for kids to hone their drumming skills and over time reap the benefits of the programme. By all accounts the event was a huge success. As Juliane from the James House team put it, “It brought tons of smiles, happiness, inspiration and good vibes to the children and the staff. The memory of if still puts smiles on our faces”

We were moved by the great work the James House is doing in Hout Bay and look forward to further partnerships that are aligned with their programs. Special thanks to Juliane Petersen, Fabio Charles, Nomawethu and all the staff who lended a helping hand. A special shout out to Andy Byskup for personally leading this event.