Wishing on a star 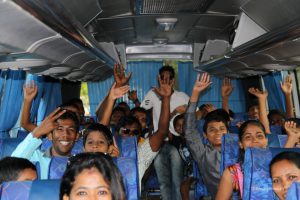 During that last visit, a group of football fans recognized Manu (a Mumbai City FC player) and spontaneously played a match with him in the middle of the road and a pair of flip flops to mark the goals. After the match, one of the fans approached Manu and thanked him for visiting and making their dreams of seeing and even playing with a Mumbai FC player come true. Manu asked if he had been to the stadium. He was embarrassed to say no and mentioned that none of them could afford it. Many families in the community struggle to make ends meet and have no money for leisure. Manu immediately realized that this was a great opportunity to bring some more smiles to this community.

For the next Mumbai City FC match we organized a bus to transport the footballs fans from this community to the stadium, which is 2,5 hrs away from the city. The fun started in the bus when the 37 fans broke out into song. Each person of these families or group of friends was handed a snack box for the match. We gave away the rest of our 85 sponsored tickets spontaneously to soccer fans living and walking around the stadium. Everyone of them was thrilled to be able to see the game live 🙂

One of the kids brought a painted poster on which he was thanking Manu for this invitation – this helped him to recognize our special guests in their block in order to greet them from the pitch after the match. This made their first football experience even more special. It was a truly memorable day for everyone involved.

Thanks to our volunteers Nidhi Gandhi and Jan Rickel, Mumbai City FC and Manu for helping us making so many dreams come true.